News > The European Movement in Rome on 25 March

The European Movement in Rome on 25 March

It was 60 years ago that the founding Member States of the European Union came together for the first time at the Palazzo dei Conservatori on the Capitoline Hill in Rome to sign the Treaties that would pave the way for the Union as we know it today. On Saturday, 25 March 2017, EU heads of state or government met in the exact same place to adopt a common road map for the European Union in the years to come.

Meanwhile, thousands of citizens took the 60th anniversary of the Rome Treaty as an occasion to express and celebrate their own vision of the EU, gathering not only in the Italian Capital but also in other European cities to march for Europe. On this day a clear and common voice of citizens across Europe could be heard, calling on European leaders to react to citizens’ needs and ideas and to create a more democratic, sustainable and united Europe.

Good morning Rome! We woke up bright & early to prepare for the forum #futureofEU #MarchForEurope2017 pic.twitter.com/btnZFzQEwS

In Rome, citizens of all ages and backgrounds gathered in the early afternoon of 25 March at the Piazza della Bocca della Verità to express their support for the European project by marching together to the Colosseum. Many members of the European Movement network were present in Rome, at the same time also organising and participating in events in their respective Member States.

The European Movement Norway organised a rally in front of the Norwegian Parliament in Oslo under the motto ‘Together for Europe, no to populism’.

In addition to the ‘March for Europe’, the European Movement International held a ‘Forum on the Future of Europe’ together with its members UEF and JEF, taking place on the morning of 25 March. The conference brought together personalities from politics, civil society and academia, including members from the European Parliament, representatives from civil society organisations such as the European Youth Forum and the European Environmental Bureau as well several journalists and the film director Albert Solé.

The European Movement France celebrating the Rome Treaty anniversary not only in Rome but also at the Palais Royal in Paris with a ‘Mannequin Challenge’.

The huge participation in the numerous marches and actions around the 60th anniversary of the Rome Treaty, whether they took place in Rome, Oslo, Sofia or Edinburgh, demonstrate the wish of citizens’ to speak up and to express their ideas and visions for the European Union. In times of uncertainty of the European project, European leaders increasingly need to listen to the voice of civil society and show concrete actions to promote an inclusive, democratic and sustainable future.

The European Movement Germany joined the march in Berlin and organised a gathering afterwards in their offices.

The European Movement International recently published a joint statement titled ‘The Europe we want: Just, Sustainable, Democratic and Inclusive’ and signed by 242 organisations. You can also read the joint letter from members of the Honorary Council of the European Movement International such as Jacques Delors and Mario Monti, addressing European leaders ahead of the Rome Treaty anniversary.

To complement the ideas and visions that are outlined in the statements, we also asked citizens in Brussels as well as Margrethe Vestager, European Commissioner for Competition, Neven Mimica, Commissioner for International Cooperation and Development and Herman Van Rompuy, fomer Prime Minister of Belgium and first President of the European Council, to tell us which values and accomplishments of the European Union they personally wished to emphasize and what future they saw for the EU.

For more photos of the March for Europe and the Forum on the Future of Europe in Rome click here: 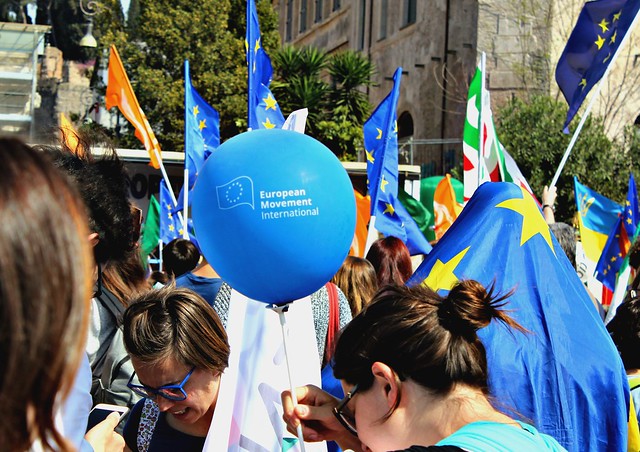 The European Movement is a network of organisations that has mobilised citizens and advocated for a democratic, federal and enlarged union since 1948.